Xoloitzcuintle or the Mexican Hairless Dog is one of the most mysterious species on earth. They survived in its original form after the Millennium. Xolo is now recognized as a national breed of Mexico. It’s known for its healing properties since antiquity. The breed has always been considered a guide and a defender, protecting the house from evil spirits and intruders. 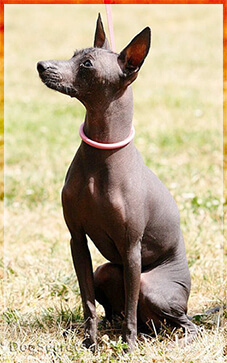 Mexican Hairless dog is one of the oldest breeds of dogs that exist today in their original form. The origins of the first Xolo went far before our era in the times of Antiquity. The skulls of these dogs found in Mexico are more than 3,300 years. Quite rightly Xoloitzcuintle can be called the first dog of America.

The word "Xoloitzcuintle" has many possible translations: "God," "slave", "conductor to the afterlife". Another name for the breed is a complex word in the language of ancient Aztec Nahuatl, which consists of two parts "Xolo" and "itzkuintli." "Xolo" comes from the Aztec god Xolotl. On ancient paintings the god Xolotl depicted as ugly dog with his hands and feet. The word "itzkuintli" on Nahuatl (the Aztec language) is translated as "dog." Consequently, "Xoloitzcuintle" means "dog of the god Xolotl."

It was believed that the Xolo is a conductor of souls to the Land of Spirits.

There was the custom at the funeral to kill one of these dogs with an arrow in her mouth and bury the remains, together with the remains of a man. The Indians believed that after death only due to the dog soul of the deceased will be able to cross the river, which is an obstacle on the way to paradise.

In the Mexican state of Colima graves were found with the figurines of dogs are made of red clay, together with clay objects (dishes, etc..). These findings are dated period of 200 - 900 years BC, is a caricature of short and fat dogs, which "dogs of Colima" is now called. Collection of these figurines is in the National Museum of Anthropology in Mexico City.

Xolos were also used as a food source in Central America. The Indians believed that eating meat Mexican naked, they get some kind of spiritual protection. Dogs were considered a great delicacy and eaten at the sacrificial rites, marriage ceremonies and funerals. Particular importance was attached to different colors Xolo, and therefore in accordance with a ritual or ceremony were selected certain dogs.